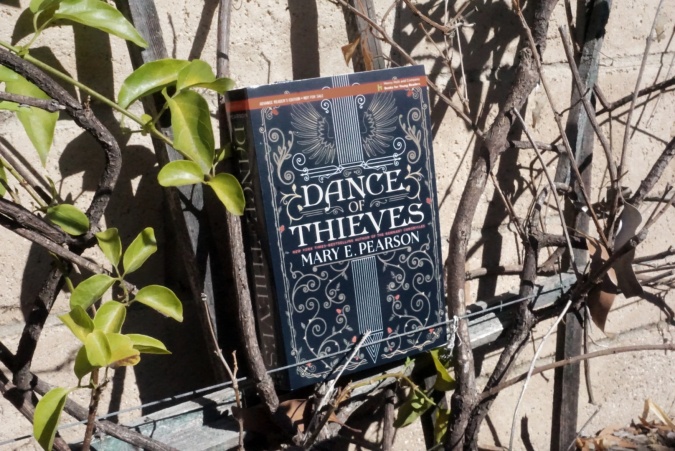 Dance of Thieves by Mary E. Pearson was one of the many books I picked up at San Diego Comic-Con this year. I read The Kiss of Deception right before the con, and I really enjoyed that one so I was excited! Unfortunately, I have to say I didn’t enjoy this one as much as Kiss of Deception. I think fans of the Remnant Chronicles series will probably enjoy it, but if you want to know more about the good, the bad, and the instalove, read on!

Initially, I was excited because there are 2 primary POVs in Dance of Thieves. Kazi who is a Venden soldier and buddies with the MC of the Remnant Chronicles, and Jase who becomes the leader of a society not recognized as an established kingdom. My expectation was that the cat and mouse game mentioned in the synopsis would involve these two characters outsmarting each other back and forth throughout the book. That didn’t really happen. Much of the plot was predicated on these characters not communicating their assumptions to each other, which I find weakens any narrative.

One other element I didn’t enjoy was the romance. It was insta-love/hate-to-love at it’s finest. I don’t read for romance, to begin with, but I did not find this relationship compelling. I didn’t understand why the characters were drawn to each other, aside from sheer convenience.

The odd romance ties into another thing I didn’t quite get which is the character motivations. Kazi is sent to Jase’s home to find a traitor, and bring him to justice. However, very little time is spent watching Kazi attempt to find this person or information about this person. Most of the attention of the plot is on other things like the instalove.

For Jase, I was confused about his moral compass. There’s one section where Jase is explaining why it’s important to empathize with one’s ancestors to Kazi, and 6 pages later Kazi is reminding Jase to be empathetic to some nearby farmers. At the very least he was hypocritical to those around him.

Overall, the conflict felt weak to me, and the dialogue was repetitive.

There are some elements I really did enjoy. Though their characters weren’t my favorite, I felt that Kazi and Jase were portrayed as somewhat genderless. Mary Pearson does an amazing job at writing female characters who are strong-willed and resourceful. Kazi is no exception to this. Oftentimes, I would not be able to tell if I was reading a Jase or Kazi chapter. Though that may be a point against the book for not having unique voices, I liked having a female voice that could easily have been male, and vice versa.

The world of the Remnant Chronicles is interesting and timely. There is a big theme in the book about the evils of the past coming back around to the present. There’s an emphasis on staying vigilant to the spark of danger and rooting it out as soon as possible. I like this approach to the history of the world, and I think it could lead to some big trouble later in this series.

Dance of Thieves will be on shelves August 7th, and if you loved the first trilogy I really do think you should give this one a shot. It’s a fun fantasy story if you don’t take it too seriously, with a big dollop of cheesy romance.