I was recently approved for an eArc of Shadow of the Fox by Julie Kagawa. I saw the word kitsune and I was sold! I have a kitsune tattoo on my foot, and a deep love Japanese language and mythology so I really enjoyed diving into this fun, magical world. Read on to learn more about this one!

I haven’t found a lot of YA that dips into Japanese culture, and that was one of the major reasons I was drawn toward Shadow of the Fox. I also haven’t read anything else by Kagawa yet, so I was curious about her writing style and the way she would approach  Japanese myths. There were so many small elements that made me fall in love with the book. Japanese phrases and words are used fairly often, and I enjoyed that. I also loved how the Kitsune-bi (fox magic) was portrayed. It’s very true to the Kitsune myths I’m familiar with and it was adorable and just a lot of fun to read.

The general atmosphere of the book is much zanier and almost quirky, I did not anticipate that. It’s a lot like an anime actually, in that way. I was constantly reminded of shows & movies like Samurai X, Rurouni Kenshin, Bleach, Dragonball Z, & Princess Mononoke while reading. The sections of the book are very episodic so you can imagine the action happening over the course of a 25-minute episode really well.

Yumeko, the main character, really stole my heart. From the tops of her fox ears to the tip of her fluffy tail she is just cute, kind, and heartwarming. She’s also very clever and brave. She does so much for her compatriots emotionally and during battles. I just loved watching her experience new parts of her world and interact with both the mortal and paranormal realms.

Tatsumi is the male protagonist, and he is also a fascinating character. He is tasked with wielding a demon infested sword (Hint: book 2 is called Soul of the Sword). Though he is incredibly powerful, that power comes at the cost of his emotional attachment to everyone he knows. He has to keep his emotions in check so the demon doesn’t take over his body. Though he is a bit hard to get to know as a character, I still felt really concerned about his ability to stay true to himself and to fend off the advances of his sword-demon.

If you love Japanese culture, or anime I would definitely recommend picking up Shadow of the Fox on October 2nd! I haven’t read many other books quite like this, and I am really looking forward to seeing how Yumeko’s story unfolds. Thanks to NetGalley for providing a copy to review! 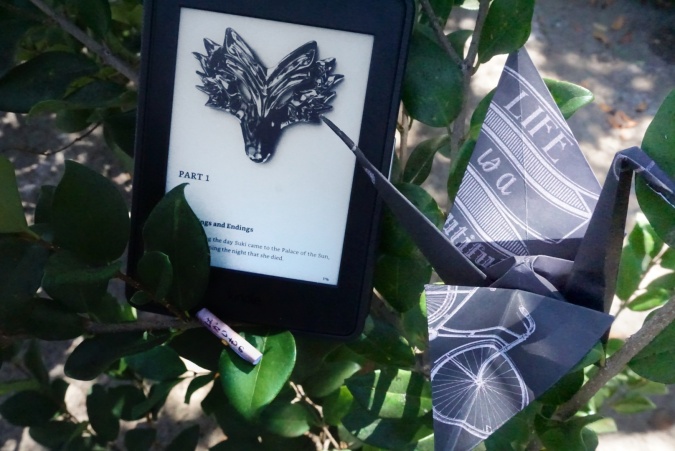 5 thoughts on “Shadow of the Fox: NetGalley Review”